What Is Rhodiola Rosea?

Rhodiola is an adaptogenic medicinal herb made famous for its adoption by the Russian military in the 1960s and 70s.
The plant was virtually unknown to the world until one of the Russian researchers that studied the herb leaked some of their findings to the rest of the world. The research program was kept top secret for many years as the Russian government searched for supplements that could make their soldiers faster, stronger, and more resilient on the battlefield.
They uncovered some incredible findings in their early research on Rhodiola and started testing it on their military foot soldiers operating in high altitude regions of Northern Siberia.
Since this time, public interest has exploded, and there are now thousands of independent research studies highlighting the many different applications of this incredible plant.
Most people are using Rhodiola supplements to support the stress response. This covers many different applications including athletic training, periods of high stress at work or school, and to help people recover from chronic illness.

Others are using the herb as a daily health supplement to increase their resilience and promote longevity.

The Main Benefits of Rhodiola Rosea Include:
•  Improves oxygen handling in athletes and people travelling to high altitudes.
•  Improves our ability to handle stress.
•  Supports memory and concentration.
•  Protects the brain from age-related decline.
•  Supports mood and mental health.

The Science Behind Rhodiola Rosea

1. Stress Support
One of the reasons the Russian military was so interested in Rhodiola was for its effects on ameliorating the stress response.
The human body is well conditioned for managing various forms of stress. Whenever something poses a risk to our health or livelihoods the stress response becomes active. This system is designed to give us a temporary boost to get through the stress unscathed.

If we experience stress to often this system can become dysfunctional — causing severe overreactions to even the smallest triggers of stress.
We’re often exposed to stress triggers such as financial debts, tight deadlines, relationship troubles, excessive exercise, or high expectations from others. Over time our threshold for resisting stress becomes very low — leading to overreactions to small triggers, and side-effects of chronically high cortisol levels (like insomnia, anxiety, brain fog, or fatigue).

Rhodiola is able to override this system by targeting the hypothalamus directly. It works by increasing the sensitivity of the hypothalamus to cortisol. If the hypothalamus senses that we already have enough cortisol in the bloodstream, even in the face of stress triggers it resists telling the adrenal glands to produce more cortisol - ultimately allowing us to resist stress more effectively.

2. Athletic Enhancement
Rhodiola is a popular athletic supplement for its ability to help us resist stress (see point above) - but it doesn’t end here.
This versatile herb has also been shown to regulate AMPK - an enzyme found within our cells that controls energy homeostasis throughout the body.
As we exercise our cells use up all the available energy. AMPK then steps in to increase the uptake and oxidation of fatty acids and glucose to release their stored energy. AMPK also slows down unnecessary cellular processes like protein synthesis to conserve energy further.

The result is a greater ability to resist fatigue while exercising — especially during endurance exercise.

3. Memory & Cognitive Health
A lot of the memory and cognitive enhancement effects attributed to Rhodiola are a side-effect of its adaptogenic properties. The idea is that if we can resist stress for long periods of time, we can work harder, and longer before becoming fatigued.
There are other ways this herb can improve our cognitive performance though — including its ability to inhibit an enzyme in the brain known as monoamine oxidase.
Monoamine oxidase is an important enzyme that breaks down the monoamine class of neurotransmitters in the brain.
By preventing the activity of monoamine oxidase, these neurotransmitters can build up to higher levels in the brain. This is a common mechanism a lot of other nootropics use to increase focus, motivation and mental energy levels.

Is Rhodiola Rosea The Supplement For Me?

Rhodiola has a lot of uses — so a lot of people can stand to benefit from the herb.
Its ability to increase our resistance to stress makes it an excellent supplement for anybody experiencing high levels of stress on a regular basis. The supplement is especially popular as a daily supplement among students, entrepreneurs, business executives, and athletes.
You can also take Rhodiola for short term stents to prepare for upcoming stresses. This could mean travelling, while recovering from debilitating illnesses, before final exams, or whenever travelling to high altitudes.
Many people will also start taking Rhodiola as they get older to help them maintain energy levels, and resist age-related cognitive decline. 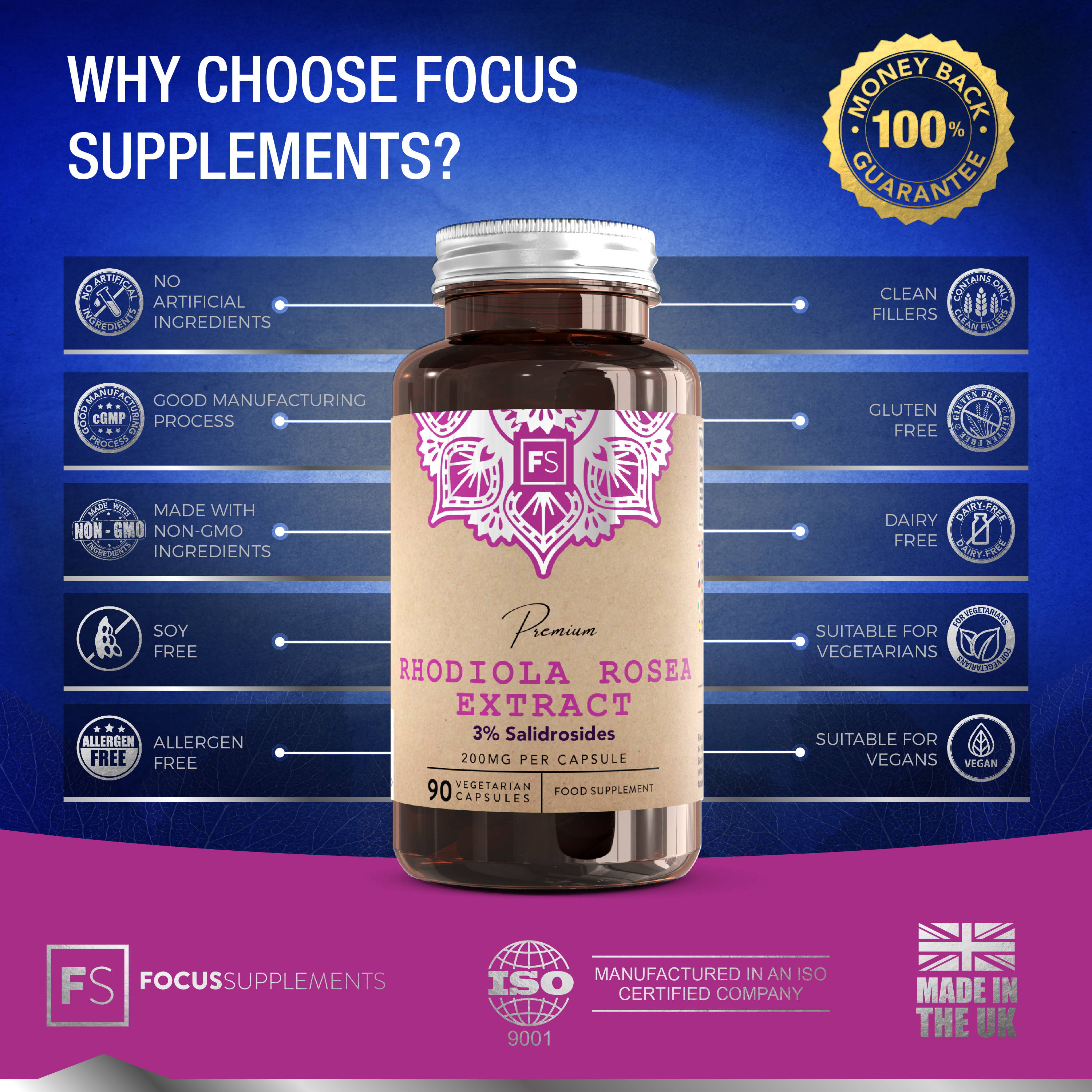 There are a few other supplements you can combine with your Rhodiola Rosea to achieve an even greater benefit...

Rhodiola is one of the best herbs we have available for helping us resist stress. You can make it even better by taking it in stacks with other adaptogenic herbs that have more of a focus on the adrenal glands themselves. While Rhodiola has some effect on the adrenals, most of its benefits come from the top down — starting at the hypothalamus.
We recommend taking Rhodiola with herbs like Ashwagandha (Withania somnifera), Rehmannia (Rehmannia glutinosa), or Siberian Ginseng (Eleutherococcus senticosus) which all exert most of their effects on the adrenal glands directly.
The result is a much more well-rounded reduction in stress hormones like cortisol, and overall resistance to stress triggers.
SHOP ASHWAGANDHA KSM-66

A lot of people are mixing their Rhodiola with other cognitive-enhancement supplements like Caffeine & L-Theanine.
Caffeine increases mental alertness but can be a trigger for stress. Rhodiola and L-Theanine directly oppose the negative side-effects of caffeine to allow for a more well-rounded improvement in cognitive function.
L-Theanine is better for the anxiety and jitters, while the Rhodiola is better for preventing the activation of the stress response from the caffeine.
SHOP L-THEANINE 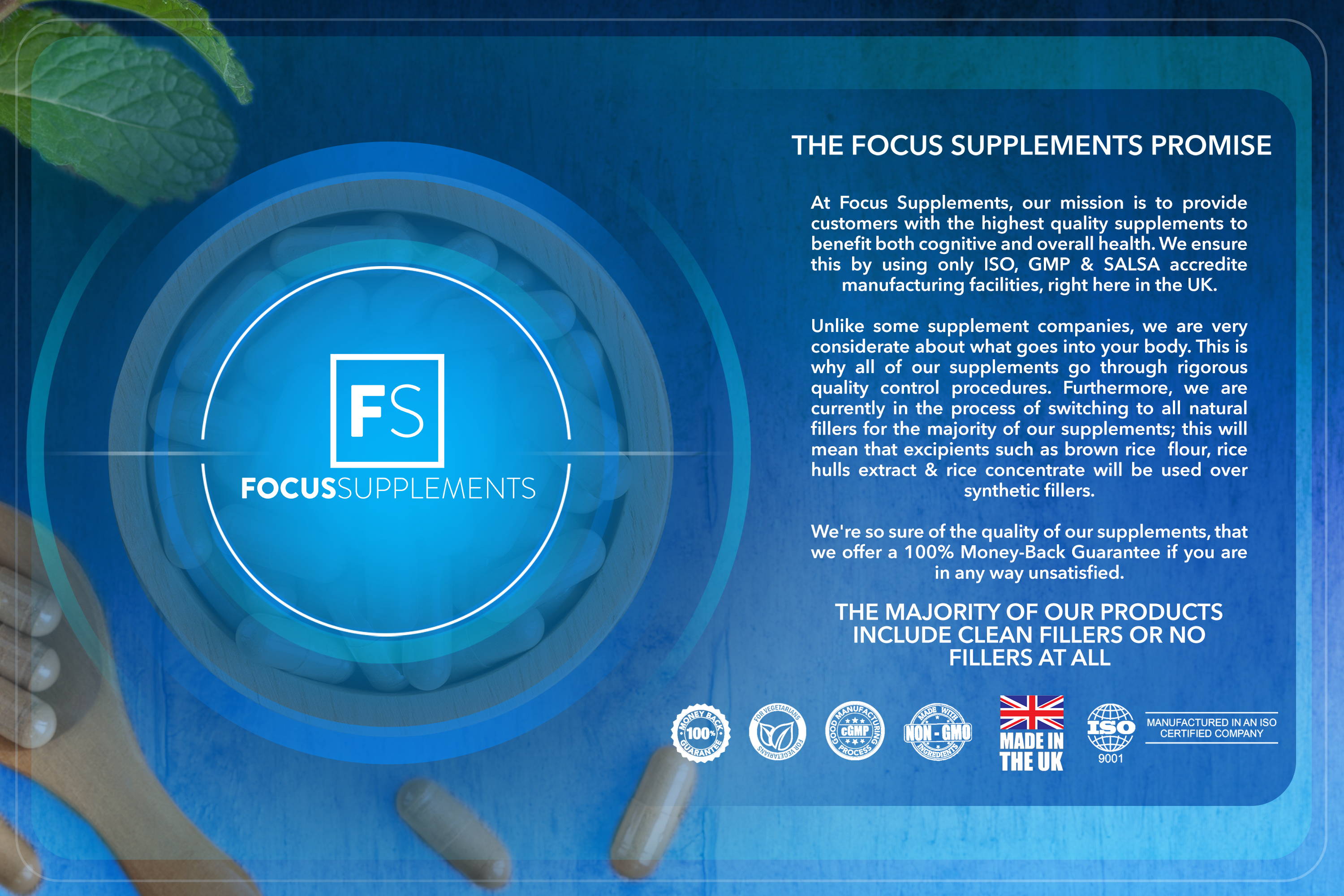 Appears strong (high salizoride made me think this is actually crenulata). Bitter taste, but appears to be the real thing. Salizoride is more geared to energy, but the product does not mention rosavins.

I’ve been using Rodhiola Rosea product for over a year and it helped me in many ways. It helped being more focused and clear in mind.It usually takes months for medications to kick in but with Rodhiola Rosea I can see the difference even after few days of taking it. I can definitely see the difference to when I forget to order new ones. When I’m not taking it, my brain is foggy and I’m more forgetful. I’ve struggled with memory and focus since childhood and I will probably never be perfect but using this I have seen significant changes.

Fantastic for maintaining a high level of energy throughout the working day!